The JV volleyball team won the Hot Dog Invite Saturday with a record of 2-1. Leading the team was Baileigh O’Brien with 9 kills, 6 aces, and 28 digs. Alli Larson had 12 kills for the day, and Maddie Toney added 7 kills on the day. Ashley Leach had 30 assists, 9 aces, and 10 digs. Jalynn Kidwell also had 4 kills and 3 aces for the girls, sparking a 14 point comeback early in the day. Congrats to all of the girls on a great day.

The varsity went 0-3 on the day. While the team started the day looking strong against an undefeated Carroll, they could not pull out a win. The teams host Tipton at home on Tuesday and travel to Clinton Prairie on Thursday. 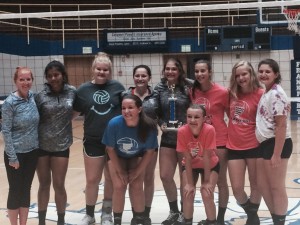