The JV and varsity volleyball teams both swept Clinton Central this evening, 2-0, 3-0. The JV had an impressive amount of aces as a team with 24 to win 25-9, 25-12. Leading the way was Jalynn Kidwell with 12 aces, 7 kills, and 3 assists. Jenna Rockhold added 7 aces. Katherine Barerro had 3 digs, and Brooklyn Abbott had an ace. Yazmin Hernandez had 2 aces and 2 kills, and Katy Benefiel had a kill and 2 digs. Miriam Uhlig came into the match and added a dig in the second game to help finish the win. 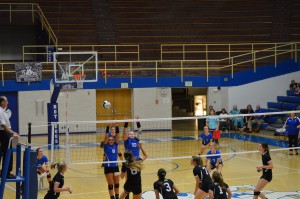 The varsity won 25-19, 25-11 decisively in games one and two. Central battled back in game three, and with the match on the line, kept things close. The team pulled out the victory 25-23. This was another huge team win as they prepare to begin the second half of the conference season next week with Crawfordsville and Danville.

Chloe Roberts: 7 kills with a hitting percentage of .636