Coming off of a long and emotional win Tuesday evening against North Montgomery, the volleyball teams both fell to Central Catholic this evening 0-2, 1-3. The JV came out rallying with the Knights, but couldn’t keep up with CC’s tough serving. Playing well for the team was Grace Campbell with 2 kills and Mallory Martin with 4  kills. Gabby Schuster added 3 digs.

The varsity came out hot this evening taking the first game 25-23. Central Catholic stepped it up a notch and the dogs did not respond, dropping the final three games. Leading the way was Ashley Timmons with 8 kills and 9 digs. Riley Isgrigg came through with 23 assists and 4 blocks on the night. Avery Drew had a solid defensive performance with 16 digs and was 9/9 serving. Emily Michael had 10 kills this evening, and Chloe Roberts had an ace, 3 kills, and 12 digs. Kimee Kingma had a solid serving night with an ace and 8 points during game one. Allyson Timmons had three blocks on the night and Maddie Toney had 6 digs. Lindsey Gay came in during the third game and picked up three digs, and Jenna Rockhold served well and picked up a dig for the team.

The team has a big week next week traveling to Western on Wednesday evening and hosting West Lafayette on Thursday. 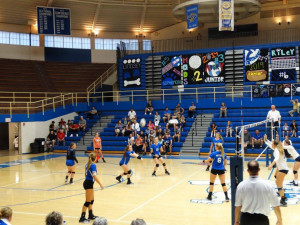