The volleyball team came out on fire Thursday night against West Lafayette, taking game one 25-17. Although the dogs led most of game two, West Lafayette’s offense came alive and was too much for the Hot Dog defense. Although the team fell in four, several objectives were met and improvements made from last week’s competition. The JV also fell in two games but continues to improve in a new lineup. Kylie Norman had 3 digs and 2 aces for the team. Lindsey Gay had 5 assists, and Mallory Martin added 3 kills and an ace. Yazmin Hernandez had 9 digs and 2 aces. 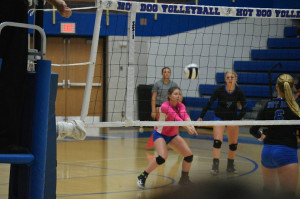