The JV and varsity volleyball teams both had victories this evening at Clinton Central, finishing 2-1 in Clinton County action. The JV won 2-0, with aggressive serving being the driving force. Grace Campbell and Kylie Norman each had 3 aces, and Lindsey Gay added 4 aces and 2 kills. Lindsey also led the offense with 8 assists. Mallory Martin had 4 kills, Ingrid Valdes and Sydney Pearcy each had 3 kills, and Kylie Norman had 2 kills. Yazmin Hernandez had a solid defensive performance with 7 digs. 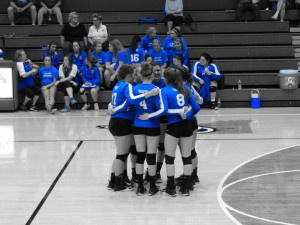 In varsity action, Riley Isgrigg had 37 assists and 21 digs, while Ashley Timmons and Emily Michael each added 12 kills. Kimee Kingma had another strong night with 7 kills and 3 aces. Chloe Roberts had a solid night with 4 kills and 2 aces, while Madison Toney had 6 digs. Leading the defensive effort was a combination of strong blocking and tough back row play. Avery Drew had 19 digs while Ashley and Allyson Timmons each had 3 blocks. Jenna Rockhold also had a strong evening with 4 digs and several 3 point service runs for the team.

Thank you to the small but mighty student section who were loud and proud Hot Dogs this evening. The team appreciates your support!!

The girls host Peru on Thursday evening in Case Arena.