The varsity and JV volleyball teams defeated Peru this evening in Case Arena 2-0, 3-0. In varsity action, Chloe Roberts had a season high of 10 kills with a hitting percentage of .500, a career high. Ashley Timmons led in kills with 13 and also played strong defensively with 17 digs, while Kimee Kingma and Emily Michael each added 5 kills. Allyson Timmons had another strong night at the net with 3 blocks. Riley Isgrigg had 28 assists, 2 blocks and 2 kills. Avery Drew had a career high of 5 aces along with 10 digs. Madison Toney had 10 digs and an ace, and Jenna Rockhold had an ace.

In JV action, Lindsey Gay led the team with 9 assists, 5 aces, 8 digs, and 4 kills. Ingrid Valdes had 5 kills, and Yazmin Hernandez had 7 digs, 2 assists, and an ace. Grace Campbell had an ace, and Mallory Martin had 2 kills and 3 digs. 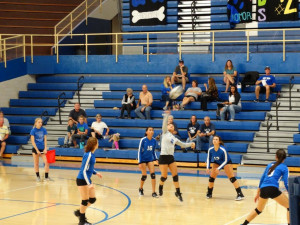