Both the JV and varsity volleyball teams defeated Crawfordsville on the road Tuesday evening, moving the varsity record in the Sagamore Conference to 3-2. In varsity play, after a slow start against an emotional opponent on their senior night, the team took games 2-4 decisively. Riley Isgrigg had 48 assists and 4 blocks. Kimee Kingma had 11 kills, while Emily Michael had 15 kills and 10 digs. Ashley Timmons had 15 kills, 5 blocks, and 14 digs. Chloe Roberts had 5 kills, 7 blocks, and 14 digs. Allyson Timmons added 3 kills and 5 blocks. Avery Drew had 23 digs, Maddie Toney added 7 digs. Lindsey Gay had an ace. Riley Isgrigg and Avery Drew hit milestones in their career play by earning their 2000th assist and 1000th dig. 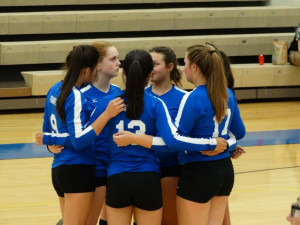 In JV action, the team got off to the slow start, trailing for most of game one. The strong serving of Skiila Robey with 6 aces and 8 points got the girls back into the game. Lindsey Gay had 4 kills and 7 assists, Kylie Norman had 3 kills and 4 digs, Yazmin Hernandez had 2 kills and 4 digs, Sydney Pearcy had a kill and a dig, Katherine Barrera had 5 digs, and Grace Campbell had 2 digs. Ingrid Valdes had a strong night with 3 blocks, 5 kills, and 2 aces.

Volleyball hosts Danville Thursday evening in Case Arena at 6:00. The team will dedicate this match to Daniel Olivas, and 8th grade student at FMS who is the brother of volleyball alumna Tania Olivas. Purple wrist bands will be sold and donations can still be made toward the cause which will benefit the Olivas family.