On Saturday Colton Crum put himself in the record books. Before the
2018 IHSAA Boys Track and Field State finals,  he was already
considered one of the most decorated student-athletes to walk the
halls of FHS.  He had already placed second in the state finals twice
and 3rd once.  Colton put the icing on the cake with the best
performance of his career.  Winning his first IHSAA State
Championship, setting a new Indiana Pole Vault Record, new school
record and taking home the Mental Attitude Award. 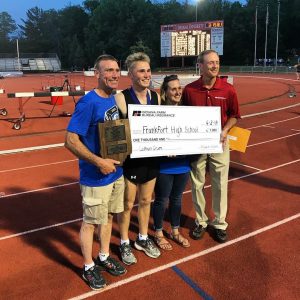 Colton”s freshman year he placed second behind Bloomington South’s
Deakin Volz. After Crum was eliminated Volz set the state record
jumping a height of 17’6”.  As Volz came off the mat he told Crum he
was setting the bar for him to break.  Three years later Colton made
an attempt to tie the record at 17’6″ and missed. With no other
competitors left and the Championship already sealed, Colton Decided
to raise the bar a quarter of an inch for two attempts to break the
record.  Crum’s first attempt at 17’6.25″ was very close but he did
not clear the bar.  With one last chance to set the record, Crum made
a little adjustment and cleared the bar on his final attempt in style.

If the day could get any better Colton won the Hinshaw Mental Attitude
Award.  At the conclusion of the meet, Members of the IHSAA Executive
Committee named Colton Crum of Frankfort High School as the winner of
this year’s Robert S. Hinshaw Mental Attitude Award in Boys Track and
Field. Colton is the first athlete in school history to win a State
Mental Attitude Award. The IHSAA Executive Committee, on behalf of
Indiana Farm Bureau Insurance, presented a $1,000 scholarship to
Frankfort High School in the name of Colton Crum.