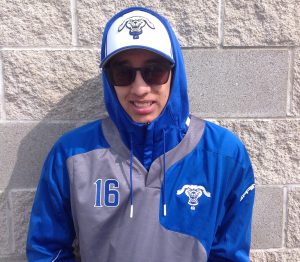 Agueda Angeles, single mother of two, has raised Roger alone since he was born. Being a baseball fan all her life, Roger plays the game to put a smile on her face. With lofty expectations coming into his senior year, Roger Angeles is looking to make his mother smile one last time.

“Roger has been a big part of our success over the last two seasons. We knew he had a tremendous amount of baseball talent, but it took him a little while to realize that himself,” said longtime head coach Andrew Dudley. After a rough two years with limited playing time, it wasn’t until his junior season that Roger realized the “tremendous amount of baseball talent” that Coach Dudley saw in him all along. Hitting .329 and batting leadoff, Roger became the offensive catalyst for the team; getting on base, stealing bases, and pressuring the defense into tough situations. While it was a breakout year offensively, it was Roger’s defense that stood out the most. Coach Dudley called Roger the “anchor” of the defense, heading or assisting on a combined sixty-eight total outs during the season, all the while only commiting four errors through twenty-five games played. With consistent offensive and defensive numbers all throughout his junior year, Roger was named to Second Team All-Conference.

Despite his achievements his junior year, Roger was left wanting more. Reflecting on what it meant for him to make Second Team All-Conference as junior, Roger said, “Last year was great, but knowing that I was so close to First Team All-Conference pushed me to get better and better everyday over the summer.” Currently, over half way into his senior year, Roger’s offseason motivation seems to be paying off. He is on pace to record a career high in batting average, runs scored, runs batted in, and stolen bases. Crediting Coach Dudley for his success, Roger is well on his way to being named to First Team All-Conference. With his team rounding into form as they prepare for yet another deep tournament run, a First Team All-Conference award might not be the only piece of hardware that Roger will be carrying around at the end of this year.

As Roger’s career prepares to come to a close, his strong relationship with his mother will carry on. When Agueda looks back on her son’s baseball career, she will be left smiling, not just at the player that he has become, but more importantly the man.