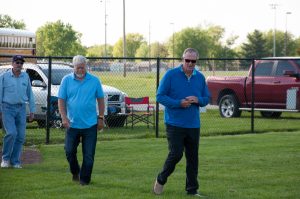 The Sagamore Athletic Conference was founded in the 1966-67 school year. Baseball was the only sport to award a champion that year, holding a conference tournament at the end of the regular season. Tonight we would like to recognize the 4 seniors from Frankfort’s 1967 team,  the first every Sagamore Conference champions.

John Doan. John was a brick wall at 3rd base. Nothing got through him. John’s fielding the hot corner and his hitting was very important to us not only winning the first Sagamore Conference Championship.

Steve Miner was the team’s Shortstop. With John and Steve on the left side of our infield a pitcher didn’t have to worry when trying to get a double play. Steve was also awarded the Goodnight award which is given to the most outstanding senior baseball player.

Next is Denny Emery, Denny pitched every game in the conference tourney in 1967. Denny was the winning pitch of every game.  Denny was the big right handed pitch with the blazing fast ball.

Finally we have Denny Wainscott. Denny was the other half of the lefty righty combo. Denny played first base when he wasn’t pitching.  Denny Wainscott was the winning pitcher beating Anderson Madison Heights 1-0. He went 5 games before allowing an earned run.

The team’s accomplishment, along with the names of these 4 players will recognized as the latest addition to the brick wall behind the Hot Dogs’ dugout.