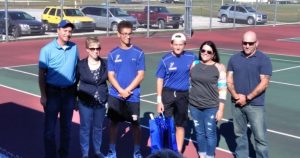 The Hot Dogs started their evening by honoring the teams two seniors.  Noah Wilder and Riley Grasham  were recognized  for their dedication and work ethic to the tennis program.

Frankfort went on to get their first three points in singles play.  Chase Thomas was off the courts first, followed quickly by Jim Ostler.  Noah, had a very competitive match, but once again, he played with patience and smarts to overcome his opponent.

Two doubles were very  busy,  as they won the first set, but then found themselves into a third set and down 5-0.   But they were not to be denied the win, Carter Wilson and Elijah West battled hard and fought back to win their match, in a tie break.

One doubles Riley Grasham and Luke Hodge also had a tight match on their hands.
As darkness was over coming the court.  Riley and Luke fought hard against their opponent to push the match into a tie break to decide the winner.   Although they fell short, Riley and Luke gave it their all,  and  the team is super proud of them.

Next match : Saturday tourney at Home.  9am