The volleyball team defeated the Gophers on Thursday evening, 3-1. The coaches would like to first thank the parents and awesome student section for their support tonight!

Leading the way for the team was Ashley Timmons with a season best of 19 kills and 24 digs. Chloe Roberts also had a big night with 10 kills, 19 digs, and serving 11 points for the team. Lindsey Gay continues to run the offense well with 41 assists and 11 kills. Allyson Timmons also had a season high of 10 kills, and Tarah Martinez showed extreme composure with 3 aces and 17 digs. Morgan Adamson has 3 kills with a solo block, Maicee Sterrett had 7 digs, and Kylie Norman had an ace and 13 digs. Sydni Whitaker came in to serve at a key moment and had an ace. The team is 2-0 in the county and travels to Michigantown on Tuesday to face off against Clinton Central. 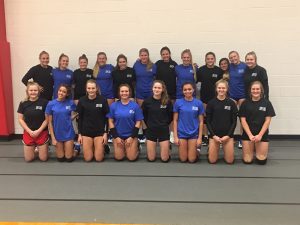