The volleyball team traveled to Crawfordsville Tuesday evening and swept the Athenians, 3-0. This was a fantastic team win, bringing them to 2-3 in conference play with matches against Danville and Southmont in the next week. Leading the way for the team were seniors Chloe Roberts and Ashley Timmons. Chloe had 5 aces, 16 digs, and 13 kills, and Ashley had 16 kills, 12 digs, and 2 aces. Lindsey Gay played well with 37 assists, and Allyson Timmons had 5 kills and defended the tape well against a tough C’ville OH. Kylie Norman had 14 digs and two aces, and Tarah Martinez had 12 digs and was clutch by serving the game out when it was tied in game three, 24-24. Morgan Adamson provided a big block this evening and added 2 kills. Maicee Sterrett was mentally tough tonight with 13 digs. In game 3, the bench played a vital role in the comeback by being engaged, loud, and encouraging for their teammates. Great work ladies!!

Make sure to join the girls on Thursday night to celebrate our seniors and to take on Danville. 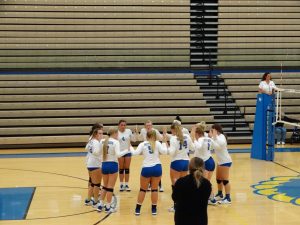